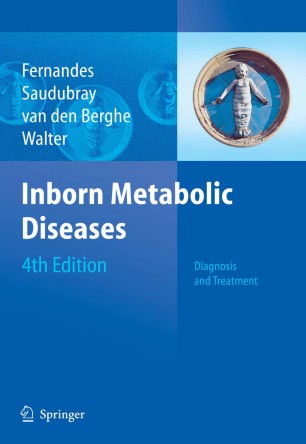 Since the publication of the first edition sixteen years ago, Inborn Metabolic Diseases – Diagnosis and Treatment has become a classic textbook, indispensable for those involved in the care of children and adults with inborn errors of metabolism, including pediatricians, biochemists, die- th cians, neurologists, internists, geneticists, psychologists, nurses, and social workers. This new 4 edition has been extensively revised. An additional clinician, John Walter, has joined the three other editors, there is a new chapter on neonatal screening, including tandem MS/MS, and several new disorders have been included, for example defects involving the pentose phosphate pathway (polyol metabolism) and disorders of glucose transport. However, the focus of the book remains clinical, describing symptoms and signs at presentation, how to come to a diagnosis and methods for treatment. As with the previous edition, the book can be used in two main ways. If the diagnosis is not known the reader should first refer to Chapter 1. This chapter, which includes a number of algorithms and tables, lists the clinical findings under four main headings: the neonatal period and early infancy; acute presentation in late infancy and beyond; chronic and progressive disease; and specific organ involvement. In addition a list of important symptoms or signs can be found at the end of the chapter which then refers either to the text, a table, a figure, an algorithm, a list of disorders, or a combination of these.