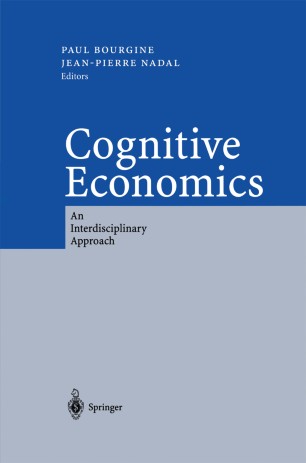 The social sciences study knowing subjects and their interactions. A "cog­ nitive turn", based on cognitive science, has the potential to enrich these sciences considerably. Cognitive economics belongs within this movement of the social sciences. It aims to take into account the cognitive processes of individuals in economic theory, both on the level of the agent and on the level of their dynamic interactions and the resulting collective phenomena. This is an ambitious research programme that aims to link two levels of com­ plexity: the level of cognitive phenomena as studied and tested by cognitive science, and the level of collective phenomena produced by the economic in­ teractions between agents. Such an objective requires cooperation, not only between economists and cognitive scientists but also with mathematicians, physicists and computer scientists, in order to renew, study and simulate models of dynamical systems involving economic agents and their cognitive mechanisms. The hard core of classical economics is the General Equilibrium Theory, based on the optimising rationality of the agent and on static concepts of equilibrium, following a point of view systemised in the framework of Game Theory. The agent is considered "rational" if everything takes place as if he was maximising a function representing his preferences, his utility function.