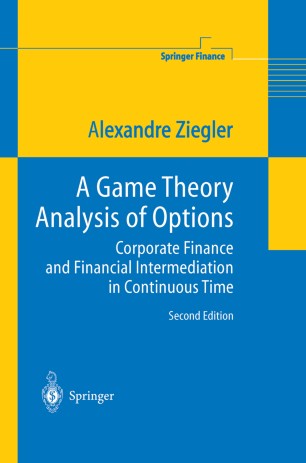 A Game Theory Analysis of Options

Modern option pricing theory was developed in the late sixties and early seventies by F. Black, R. e. Merton and M. Scholes as an analytical tool for pricing and hedging option contracts and over-the-counter warrants. How­ ever, already in the seminal paper by Black and Scholes, the applicability of the model was regarded as much broader. In the second part of their paper, the authors demonstrated that a levered firm's equity can be regarded as an option on the value of the firm, and thus can be priced by option valuation techniques. A year later, Merton showed how the default risk structure of cor­ porate bonds can be determined by option pricing techniques. Option pricing models are now used to price virtually the full range of financial instruments and financial guarantees such as deposit insurance and collateral, and to quantify the associated risks. Over the years, option pricing has evolved from a set of specific models to a general analytical framework for analyzing the production process of financial contracts and their function in the financial intermediation process in a continuous time framework. However, very few attempts have been made in the literature to integrate game theory aspects, i. e. strategic financial decisions of the agents, into the continuous time framework. This is the unique contribution of the thesis of Dr. Alexandre Ziegler. Benefiting from the analytical tractability of contin­ uous time models and the closed form valuation models for derivatives, Dr.