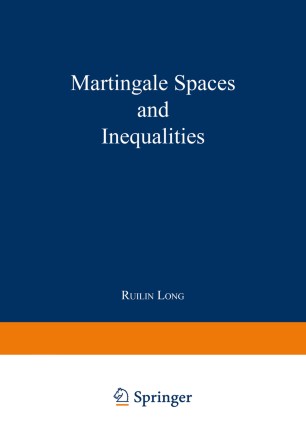 In the past twenty years, the Hp-BMO Theory on Rn has undergone a flourishing development, which should partly give the credit to the application of some martin­ gale idea and methods. It would be valuable to exhibit some examples concerning this point. As one of the key parts of Calder6n-Zygmund's real method which first appeared in the 50's, Calder6n-Zygmund Decomposition is exactly the so-called stopping time argument in nature which already existed in the Probability Theory early in the 30's, although such a close relationship between Calder6n-Zygmund De­ composition and the stopping time argument perhaps was not realized consciously at that time. But after the 70's we actually used the stopping time argument in­ tentionally as a method of thinking in Analysis. Later, when classical Hp Theory had undergone an evolution from one chapter in the Complex Variable Theory to an independent branch (the key step to accelerate this evolution was D. Burkholder­ R. Gundy-M. Silverstein's well-known work in the early 70's on the maximal function characterization of Hp), Martingale Hp-BMO Theory soon appeared as a counter­ part of the classical Hp-BMO Theory. Owing to the simplicity of the structure in martingale setting, many new ideas and methods might be produced easier on this stage. These new things have shown a great effect on the classical Hp-BMO The­ ory. For example, the concept of atomic decomposition of H P was first germinated in martingale setting; the good >.