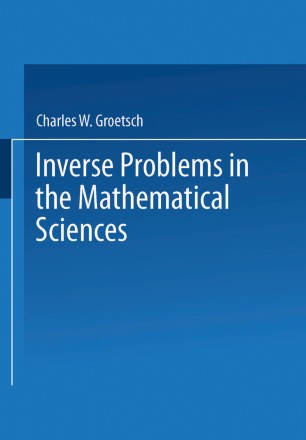 Inverse Problems in the Mathematical Sciences

Classical applied mathematics is dominated by the Laplacian paradigm of known causes evolving continuously into uniquely determined effects. The classical direct problem is then to find the unique effect of a given cause by using the appropriate law of evolution. It is therefore no surprise that traditional teaching in mathema­ tics and the natural sciences emphasizes the point of view that problems have a solution, this solution is unique, and the solution is insensitive to small changes in the problem. Such problems are called well-posed and they typically arise from the so-called direct problems of natural science. The demands of science and technology have recently brought to the fore many problems that are inverse to the classical direct problems, that is, problems which may be interpreted as finding the cause of a given effect or finding the law of evolution given the cause and effect. Included among such problems are many questions of remote sensing or indirect measurement such as the determination of internal characteristics of an inaccessible region from measurements on its boundary, the determination of system parameters from input­ output measurements, and the reconstruction of past events from measurements of the present state. Inverse problems of this type are often ill-posed in the sense that distinct causes can account for the same effect and small changes in a perceived effect can correspond to very large changes in a given cause. Very frequently such inverse problems are modeled by integral equations of the first kind.