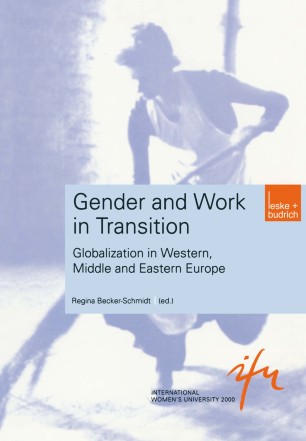 Gender and Work in Transition

World wide economic, political and cultural changes transform labor markets, frames of divisions of work, labor organization and famly structures. This can be demonstrated in a specific way in Western, Middle and Eastern Europe, where globalization and forced technology development from the one side cross with transformations processes in forms of government from the other side. Our investigation within this context emphasizes the question, how the living conditions of working women in comarison with those of men are touched by these social overturns.
The findings presented in this volume throw light on the ambiguities which political transformation and economic globalization effect on women´s work. Women profit by the emergence of working places that are brought force by new market-activities. But at the same time many of them lose qualifies occupations by shifting from full-time to part-time jobs, from high paid sectors to low remunerated industries. In all countries we find gender-based income differences. The proportion of women in political organizations is everywhere lower than that of men. The growing time pressure in the employment system reinforces women´s strain to combine household duties, child raising and paid work. Going beyond Europe we have to recognize the widening gap between industrialized regions and developing countries.