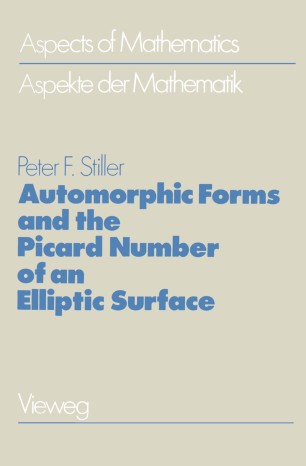 Automorphic Forms and the Picard Number of an Elliptic Surface

In studying an algebraic surface E, which we assume is non-singular and projective over the field of complex numbers t, it is natural to study the curves on this surface. In order to do this one introduces various equivalence relations on the group of divisors (cycles of codimension one). One such relation is algebraic equivalence and we denote by NS(E) the group of divisors modulo algebraic equivalence which is called the N~ron-Severi group of the surface E. This is known to be a finitely generated abelian group which can be regarded naturally as a subgroup of 2 H (E,Z). The rank of NS(E) will be denoted p and is known as the Picard number of E. 2 Every divisor determines a cohomology class in H(E,E) which is of I type (1,1), that is to say a class in H(E,9!) which can be viewed as a 2 subspace of H(E,E) via the Hodge decomposition. The Hodge Conjecture asserts in general that every rational cohomology class of type (p,p) is algebraic. In our case this is the Lefschetz Theorem on (I,l)-classes: Every cohomology class 2 2 is the class associated to some divisor. Here we are writing H (E,Z) for 2 its image under the natural mapping into H (E,t). Thus NS(E) modulo 2 torsion is Hl(E,n!) n H(E,Z) and th 1 b i f h -~ p measures e a ge ra c part 0 t e cohomology.