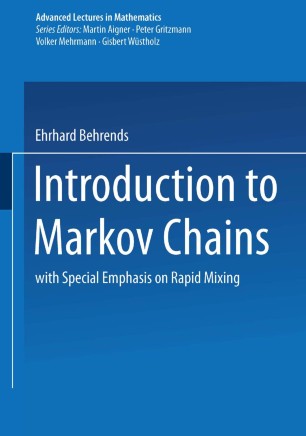 With Special Emphasis on Rapid Mixing

Part of the Advanced Lectures in Mathematics book series (ALM)

The aims of this book are threefold:
-- We start with a naive description of
a Markov chain as a memoryless random
walk on a finite set. This is complemented by a rigorous
definition in the framework of probability theory, and then we develop
the most important results from the theory of homogeneous Markov
chains on finite state spaces.
-- Chains are called rapidly mixing if all of the associated walks,
regardles of where they started,
behave similarly already after comparitively few steps: it is
impossible from observing the chain to get information on the
starting position or the number of steps done so far. We will
thoroughly study some methods
which have been proposed in the last decades to investigate this
phenomenon.
-- Several examples will be studied to indicate how
the methods treated in this book can be applied.

Besides the investigation of general chains the book contains
chapters which are concerned with eigenvalue techniques, conductance,
stopping times, the strong Markov property, couplings, strong uniform
times, Markov chains on arbitrary finite groups (including a
crash-course in harmonic analysis), random generation and counting,
Markov random fields, Gibbs fields, the Metropolis sampler, and simulated annealing. Readers are invited to solve as many as possible of the 170 exercises.

The book is self-contained, emphasis is laid on an
extensive motivation of the ideas rather than on an encyclopaedic
account.
It can be mastered by everyone who has a background in elementary
probability theory and linear algebra.

The author is professor of mathematics at Free University of Berlin, his fields of research are functional analysis and probability theory.