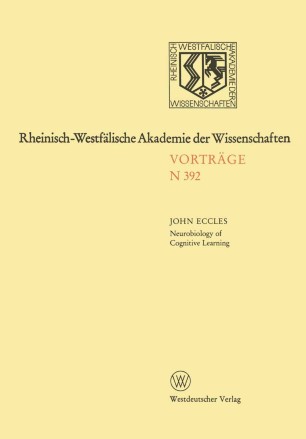 In the brain information is coded into sequences of impulses which are unit responses travelling from neurones or nerve cells along nerve fibres. The neural code is equivalent to a Morse code of dots only in a great variety of temporal patterns and with thousands of connections in parallel. Fig. lA is a diagram of Figure 1: Drawing of Four Neurones of the Cerebral Cortex. This shows the excitatory synaptic connections set up by an input fibre from the thalamus labelled (spec. aff. ), which is an enormous nucleus in the brain that provides the principal inputs to the cerebral cortex. This spec. aff. fibre branches profusely to make excitatory synapses on the spiny stellate cell (Sst) and on one pyramidal cell (Pyr). All three pyramidal cells receive on their spines excitatory synapses from Sst, and there is a special excitatory structure, called by Szentagothai a cartridge, formed by the synaptic endings on the apical dendrites of two pyramidal cells. All three pyramidal cells but not the Sst, send their axons out of the cerebral cortex as shown by the lower projecting arrows. The upper inset shows an enlargement of a spine synapse with synaptic vesicles in the presynaptic ending and the spine arising from a dendrite. The lower two insets show diagrammatically normal and hypertrophied spine synapses. (SZENTAGOTHAI, 1978).