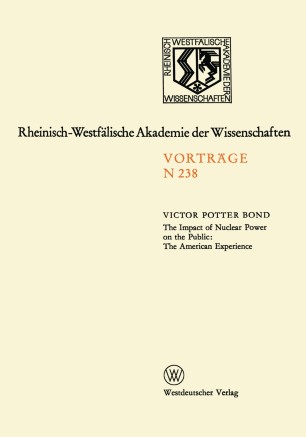 The Impact of Nuclear Power on the Public: The American Experience

The American experience with respect to electrical power production has undergone and is undergoing considerable evolution. Early, frequently strident debates tended to focus on the risks and benefits of only one pos­ sible power source (nuclear), and on one possible hazard (radiation from routine releases). Discussions and analyses now have tended to become more moderate, and deal with not only one but all feasible power sources, as well as the costs and benefits associated with fuel production, the operation of such sources, fuel transportation and waste disposal. Radiation from routine releases is no longer a major issue. A number of attempts have been made to assess the total benefits and risks of nuclear versus fossil fuel plants, in order to allow a rational basis for deciding on what type of source is best for a given situation. More data and more refined analyses are needed; how­ ever, most of those completed to date have concluded that the overall cost in terms of possible damage to health and the environment is least for nuclear power, next for oil and the greatest for coal-fired plants.