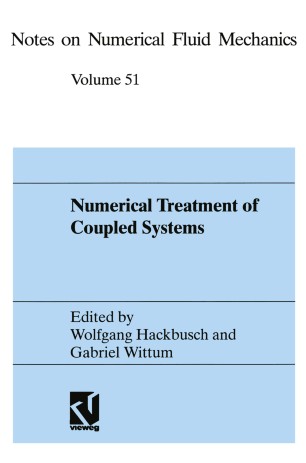 The GAMM Committee for "Efficient Numerical Methods for Partial Differential Equations" organizes seminars and workshops on subjects concerning the algorithmic treatment of partial differential equations. The topics are discretisation methods like the finite element and the boundary element method for various type of applications in structural and fluid mechanics. Particular attention is devoted to the advanced solution methods. The series of such seminars was continued in 1995, January 20-22, with the 11th Kiel-Seminar on the special topic Numerical Treatment of Coupled Systems at the Christian-Albrechts-University of Kiel. The seminar was attended by 100 scientist from 9 countries. 23 lectures were given, including two survey lectures. Different kinds of couplings are considered in this volume. The coupling of different components may occur in the physical model. On the other hand, a coupling of subsystems can be generated by the numerical solution technique. General examples of the latter kind are the domain decomposition (see p. 128) or subspace decomposition (p. 117). The local defect correction method couples different discretizations of the same problem in order to improve the results, although the basic linear system to be solved remains unchanged (p. 47). In general, the aim of the numerical coupling is to make use of (efficient) subsystem solvers (p. 1). The combination of different discretization techniques is mentioned on page 59.