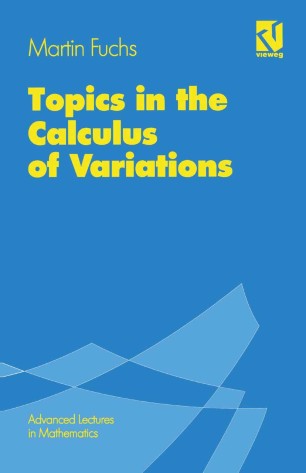 Topics in the Calculus of Variations

Part of the Advanced Lectures in Mathematics book series (ALM)

This report grew out of a series of lectures given at the East China Institute of Technology, Nanjing, during September 1992. The purpose of this book is to make beginning research students familiar with some problems in varia­ tional calculus which have been chosen following my personal taste but with the attempt to illustrate two basic principles in the calculus of variations which are the fundamental question of existence of (generalized) solutions and closely related the question of regularity. Chapter one is devoted to the study of variational integrals for vectorvalued functions which began with the pioneering work of Morrey [68] in the thirties. We concentrate on problems where also nonlinear side conditions are imposed on the classes of admissi­ ble comparison functions. As special cases we include mappings whose range is forced to lie in some Riemannian manifold possibly with boundary or functions whose Jacobian is required to be strictly positive. The variational integrals under consideration are typically nonquadratic with respect to the gradient which immediately leads us to classes of degenerate elliptic systems. Let us mention some of the most important applications: • p-harmonic maps between Riemannian manifolds • systems of degenerate variational inequalities • model problems in nonlinear elasticity. Usually by working in appropriate Sobolev spaces, the existence of gener­ alized solutions is rather easy to establish (see [7]) but leads to apriori dis­ continuous functions.