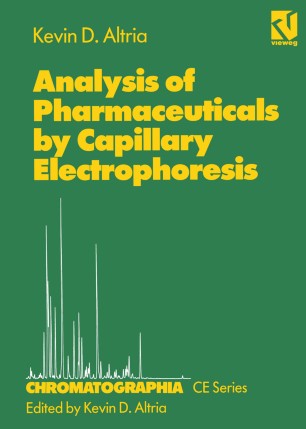 Analysis of Pharmaceuticals by Capillary Electrophoresis

During the 1980's the analysis of pharmaceuticals was dominated by the use of High Perfor­ mance Liquid Chromatography (HPLC). Other separative techniques such as Gas Chromato­ graphy and Thin Layer Chromatography offered alternatives but their quantitative capabili­ ties and/or solute range could not approach that of HPLC. The majority of pharmaceuticals are ionic and it would be reasonable to assume that electrophoresis may be useful in the analysis of pharmaceuticals. However, the electrophore­ tic instruments available in the 1980's were labour intensive and employed post-separation detection procedures. During the late 1980's and early 1990's extensive research was con­ ducted into the possibilities of conducting electrophoretic separations in capillaries. This approach allowed on-line detection and could be performed on fully automated equipment. This research led to the advent of modern day capillary electrophoresis (CE) instruments which offer similar performance and automation levels to that of HPLC. Research was also focused on developing applications for CE and particular attention was paid to applications within the pharmaceutical analysis area. These applications proved that CE could be applied to a wide range of drug types including water insoluble and neutral compounds. The ability to achieve efficient chiral separations of drugs also increased the popularity of the technique. CE with indirect UV detection has become established as a simple and effective alternative to ion-exchange chromatography for the determination of small inorganic or organic ions.