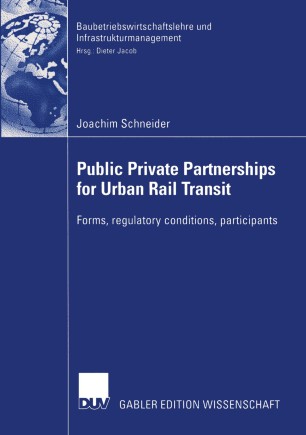 As a result of longlasting budgetary problems, public investments are gradually diminishing. This lack of public investments on the local, national and supranational level endangers economic development, especially in the transport field. Public Private Partnerships (PPP) have been advocated as a means to overcome this dead end, but the results were not always satisfactory.

Based on a broad definition of PPP, Joachim Schneider investigates the development of urban and regional rail transport infrastructure in the US and the UK and asks the following questions: Which forms of public private co-operation exist? Which are of particular interest from a German and European perspective? Which legal and organisational conditions as well as budgetary, subsidy- and procurement-rules have contributed to positive or negative results? The author shows that the most relevant examples in the USA involve private real estate developers handling urban development projects around urban and regional rail stops. The most promising examples in the UK are privately built and operated Light Rail systems. In order to successfully transfer and implement this experience, it is crucial to create an adequate institutional frame and to foster a culture of co-operation between the public and the private sector.