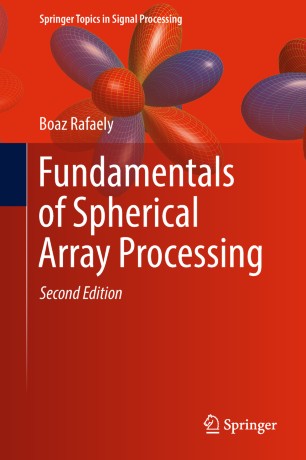 This book provides a comprehensive introduction to the theory and practice of spherical microphone arrays, and was written for graduate students, researchers and engineers who work with spherical microphone arrays in a wide range of applications. The new edition includes additions and modifications, and references supplementary Matlab code to provide the reader with a straightforward start for own implementations. The book is also accompanied by a Matlab manual, which explains how to implement the examples and simulations presented in the book.

The first two chapters provide the reader with the necessary mathematical and physical background, including an introduction to the spherical Fourier transform and the formulation of plane-wave sound fields in the spherical harmonic domain. In turn, the third chapter covers the theory of spatial sampling, employed when selecting the positions of microphones to sample sound pressure functions in space.

Subsequent chapters highlight various spherical array configurations, including the popular rigid-sphere-based configuration. Beamforming (spatial filtering) in the spherical harmonics domain, including axis-symmetric beamforming, and the performance measures of directivity index and white noise gain are introduced, and a range of optimal beamformers for spherical arrays, including those that achieve maximum directivity and maximum robustness are developed, along with the Dolph–Chebyshev beamformer. The final chapter discusses more advanced beamformers, such as MVDR (minimum variance distortionless response) and LCMV (linearly constrained minimum variance) types, which are tailored to the measured sound field.