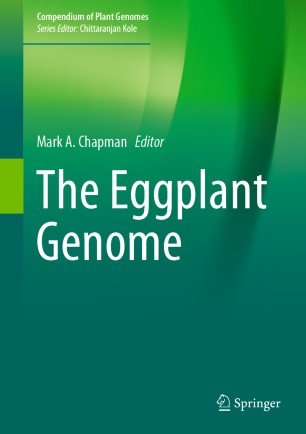 The book discusses the importance of eggplant (Solanum melongena L.) as a crop, highlighting the potential for eggplant to serve as a model for understanding several evolutionary and taxonomic questions. It also explores the genomic make-up, in particular in comparison to other Solanaceous crops, and examines the parallels between eggplant and tomato domestication as well as between the most common eggplant species and two related eggplants native to Africa (Ethiopian eggplant [Solanum aethiopicum L.] and African eggplant [Solanum macrocarpon L.]).

The eggplant genome was first sequenced in 2014, and an improved version was due to be released in 2017. Further investigations have revealed the relationships between wild species, domesticated eggplant, and feral weedy eggplant (derived from the domesticate), as well as targets of selection during domestication. Parallels between eggplant and tomato domestication loci are well known and the molecular basis is currently being investigated.

Eggplant is a source of nutrition for millions of people worldwide, especially in Southeast Asia where it is a staple food source. Domesticated in the old world, in contrast to its congeners tomato and potato, the eggplant is morphologically and nutritionally diverse. The spread of wild eggplants from Africa is particularly interesting from a cultural point of view. This book brings together diverse fields of research, from bioinformatics to taxonomy to nutrition to allow readers to fully understand eggplant’s importance and potential.