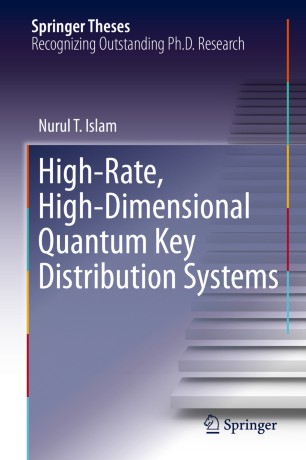 This book describes a broad research program on quantum communication. Here, a cryptographic key is exchanged by two parties using quantum states of light and the security of the system arises from the fundamental properties of quantum mechanics.  The author developed new communication protocols using high-dimensional quantum states so that more than one classical bit is transferred by each photon.  This approach helps circumvent some of the non-ideal properties of the experimental system, enabling record key rates on metropolitan distance scales. Another important aspect of the work is the encoding of the key on high-dimensional phase-randomized weak coherent states, combined with so-called decoy states to thwart a class of possible attacks on the system.  The experiments are backed up by a rigorous security analysis of the system, which accounts for all known device non-idealities. The author goes on to demonstrate a scalable approach for increasing the dimension of the quantum states, and considers attacks on the system that use optimal quantum cloning techniques.  This thesis captures the current state-of-the-art of the field of quantum communication in laboratory systems, and demonstrates that phase-randomized weak coherent states have application beyond quantum communication.