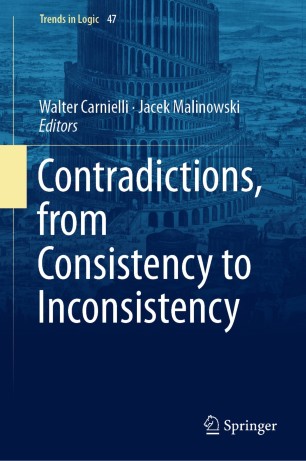 Contradictions, from Consistency to Inconsistency

Part of the Trends in Logic book series (TREN, volume 47)

This volume investigates what is beyond the Principle of Non-Contradiction. It features 13 papers on the foundations of reasoning, including logical systems and philosophical considerations. Coverage brings together a cluster of issues centered upon the variety of meanings of consistency, contradiction, and related notions.
Most of the papers, but not all, are developed around the subtle distinctions between consistency and non-contradiction, as well as among contradiction, inconsistency, and triviality, and concern one of the above mentioned threads of the broadly understood non-contradiction principle and the related principle of explosion. Some others take a perspective that is not too far away from such themes, but with the freedom to tread new paths.
Readers should understand the title of this book in a broad way,because it is not so obvious to deal with notions like contradictions, consistency, inconsistency, and triviality. The papers collected here present groundbreaking ideas related to consistency and inconsistency.

Walter Carnielli is professor of logic and philosophy at the Department of Philosophy, and a former  Director of the Centre for Logic, Epistemology and the History of Science of the University of Campinas, Brazil. He received a PhD in Mathematics from the University of Campinas and held research positions at the University of São Paulo, University of California Berkeley, University of Münster, University of Bonn, Superior Technical Institute Lisbon, and Université du Luxembourg. He has published several books and more than 100 scientific papers in combinatorics, proof theory,  semantics for nonclassical logics,  recursion theory and computability, set theory, modal logics, combinations of logics, and foundations of
paraconsistent logics. His concerns involve the expansion of reasoning horizons by non-classical logics, including the connections between logic, probability and game theory, as well as the philosophical
interpretation of non-classical logics. He is executive editor of the IGPL Journal (Oxford Journals), editor of The Non-classical Logics Corner of the Journal of Logic and Computation (together with Heinrich
Wansing) and member of the editorial board of several other journals. Carnielli is a recipient of the Jabuti Prize, Brazil's most prestigious literary prize.

Jacek Malinowski is professor of logic and philosophy at the Instituite of Philosophy and Sociology, Polish Academy of Sciences, Warsaw, Poland. He received a Master degree in Mathamatic from the University of Łódź, Poland, and PhD and habilitation in Philosophy at Institute of Philosophy and Sociology, Polish Academy of Sciences. He held research positions at Free Univeristy of Brussels, Humboltd University in Berlin, University of Leipzig, the Netherland Institute of Advanced Study in Wasenaar. He publish papers in algebraic logics, quantuum logics, logical pragmatics.  He is active as editor-in-chief of Studia Logica what he consider his main professional concern.

“‘Contradictions, from Consistency to Inconsistency’ is a collection of interesting papers in the study of the notions of contradiction, inconsistency and triviality. … Carnielli and Malinowski have made it sure that a broad range of readers will benefit from the close study of many of its chapters. … The book provides us with papers for mathematically-oriented readers as well.” (Pedro Merlussi, Studia Logica, Vol. 107, 2019)
Buy options