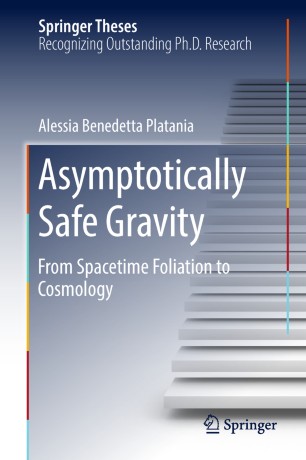 From Spacetime Foliation to Cosmology

This book seeks to construct a consistent fundamental quantum theory of gravity, which is often considered one of the most challenging open problems in present-day physics. It approaches this challenge using modern functional renormalization group techniques, and attempts to realize the idea of “Asymptotic Safety” originally proposed by S. Weinberg. Quite remarkably, the book makes significant progress regarding both the fundamental aspects of the program and its phenomenological consequences.
The conceptual developments pioneer the construction of a well-behaved functional renormalization group equation adapted to spacetimes with a preferred time-direction. It is demonstrated that the Asymptotic Safety mechanism persists in this setting and extends to many phenomenologically interesting gravity-matter systems. These achievements constitute groundbreaking steps towards bridging the gap between quantum gravity in Euclidean and Lorentzian spacetimes.
The phenomenological applications cover core topics in quantum gravity, e.g. constructing a phenomenologically viable cosmological evolution based on quantum gravity effects in the very early universe, and analyzing quantum corrections to black holes forming from a spherical collapse.
As a key feature, all developments are presented in a comprehensive and accessible way. This makes the work a timely and valuable guide into the rapidly evolving field of Asymptotic Safety.

Alessia Platania was born on the 18th of October 1990 in Catania, Italy. She started her undergraduate studies in Physics in 2009, at the University of Catania. She received her Bachelor and Master of Science in Physics in October 2012 and 2014, respectively. In recognition of her master’s degree results and thesis, she was awarded the Degree Award "Roberto Giordano" 2013/2014. In November 2014 she started her doctoral studies at the University of Catania, under the supervision of Dr. Alfio Bonanno, and Radboud University Nijmegen, in the group of Dr. Frank Saueressig. Under their supervision she worked on Asymptotically Safe Quantum Gravity and completed her Double PhD Degree in March 2018, defending a thesis titled "Asymptotically Safe Gravity - From Spacetime Foliation to Cosmology". She became a PostDoc researcher at Heidelberg University in November 2017.