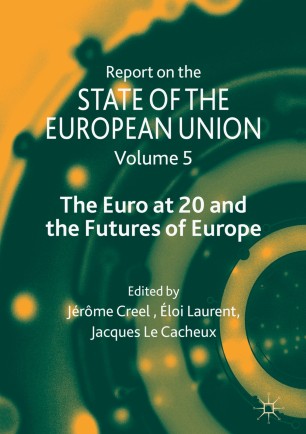 Report on the State of the European Union

Volume 5: The Euro at 20 and the Futures of Europe

This volume, the fifth instalment of the classic Report on the European Union series, offers at once an economic and intellectual historical perspective on the creation of the euro and its 20 first years, a comprehensive review of the current and future challenges of the euro area, including a critical look at the different options for the reform of its governance and institutional architecture and finally a close look at the “new euros”, i.e. the ambitious projects that could instil a new life into the stalled European project. It covers a wide range of key economic and social topics such as monetary and fiscal policy, tax competition, the EU budget, structural policy, inequality, gender equality, post carbon economy, well-being advancement and democracy. Weakened by a decade of economic crisis and shaken by the awakening of populism, the European project faces three disintegrations: democratic disaffection, monetary and financial fragmentation and territorial dislocation. If EU member states want to escape those looming risks, they must, as they always have in the last five decades, reinvent Europe in order to save it.

Jérôme Creel is Director of the Research Department at OFCE (Sciences Po Centre for Economic Research, Paris) and a professor at ESCP Europe.

Éloi Laurent is Senior Research Fellow at OFCE, Professor in the School of Management and Innovation at Sciences Po and Visiting Professor at Stanford University.

Jacques Le Cacheux is Professor of Economics at the University of Pau and Pays de l’Adour (UPPA), and at the Ecole nationale des Ponts et Chaussées (ENPC ParisTech).

​“This book by Jérôme Creel, Eloi Laurent and Jacques Le Cacheux is just great. It guides the reader through an in-depth analysis of the euro since its inception, mixing sophisticated economic and historical perspectives.  This book is also forward-looking identifying what needs to be done to guarantee the success of the euro. A must for everybody interested in the intellectual debates around the Euro, and for those who care about the future of the European Union.” (Paul de Grauwe, John Paulson Chair in European Political Economy, LSE, UK)

“The fifth edition of the Report on the State of the European Union: The Euro at 20 and Beyond offers an historical, economic and intellectual perspective of the process that shaped the creation of euro currency, and reviews its first 20 years. A thorough analysis that sets focus on past, present and future challenges for the Eurozone, allowing a critical discussion in terms of different approaches of which governance and institutional architecture the future of Euro requires, beyond the mere common currency.” (Josep Borrell, Minister of Foreign and European Affairs of Spain, Madrid, Spain)