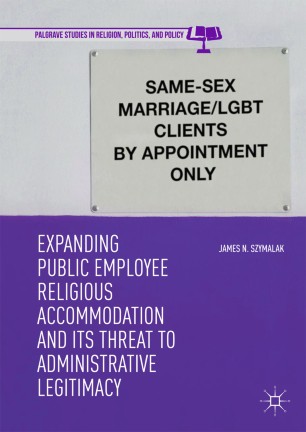 In the wake of same-sex marriage legalization, most religious conservatives realize that they now share a minority viewpoint on many social issues. Such change has forced those formerly trying to forestall social evolution to instead seek legal recusal from engaging in matters that conflict with their religious beliefs. Not surprisingly, these recent legislative attempts to “affirm” religious free expression all focus upon the rights of the religious adherent, while mostly failing to consider the potential harm to third parties. In the provision of government services, this omission can do significant, lasting damage to public perceptions of administrative legitimacy—often already perilously maligned. Should government officials be legally obligated to grant their employees religious accommodations that they know will result in negative public perceptions, or worse, inflict dignitary harm among citizens seeking its services? This book draws attention to the threat to effective government that proposed expansions to religious accommodation laws can create. From damaging public opinion, to the myriad implementation concerns such as what even constitutes a religious belief to be accommodated, these challenges should serve as a warning to legislators and religious accommodation advocates to reconsider application of these enhanced obligations to the civil service.

James N. Szymalak is Assistant Professor of Political Science and Public Administration at the University of Wisconsin-La Crosse, USA. Prior to this, he served as a senior personnel policy legal advisor to the Headquarters, US Department of the Army.