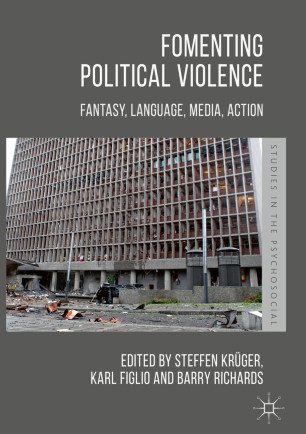 ‘Building on a recent turn toward a relational ontology in political theories of violent movements, this book’s timely and groundbreaking psychosocial intervention picks up where the Frankfurt School left off, looking below rational appearing surfaces to uncover fantasies, affects, and the conflictual unconscious dynamics that first motivate hatred and then create outlets for political violence. A must read in our increasingly violent times.’
- Lynne Layton, Harvard Medical School, Massachusetts Institute for Psychoanalysis, USA
This book offers a psychosocial perspective on political violence, employing a strong current of psychoanalytic thinking. In the course of its chapters an international roster of researchers and scholars offers a richly complex and insightful view of diverse forms of political violence and its build-ups. The authors discuss the processes by which the ground for political violence is prepared, and how violent acts are facilitated. They question how social, cultural and political constellations can develop in such a way that, for certain people in this constellation, violence becomes a logical – perversely reasonable – response. This collection demonstrates what a psychoanalytic perspective can bring to existing approaches to political violence, going beyond the social movement approach by unfolding the inherent ambiguity in accepted concepts within the study of political violence.

Steffen Krüger is a postdoctoral research fellow at the Department of Media and Communication, University of Oslo, Norway. He develops critical, psychosocial approaches to media texts and discourses.

Karl Figlio is in private psychoanalytic practice, and is also Professor Emeritus within the Department for Psychosocial and Psychoanalytic Studies, at the University of Essex, UK. His research includes psychoanalytic methodology, fundamentalism, memory and reparation.

Barry Richards is Professor of Political Psychology at Bournemouth University, UK. He has long-standing interests in terrorism and political violence, in social cohesion, and in national identity and nationalisms.