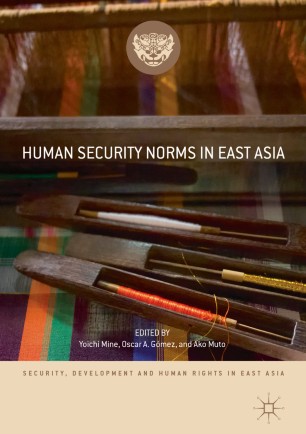 The idea of human security, one of the human-centric norms born in the United Nation, has been criticized, embraced, and dynamically transformed in nations of East Asia (ASEAN Plus Three), where people are exposed to serious insecurities such as natural disasters, pollution, epidemics, armed conflicts and possible economic downturns. While there is a kaleidoscopic diversity of human security actors and aspirations, East Asians tend to think that human security and national sovereignty are compatible, and attach particular weight to freedom to live in dignity, one of the core values of human security. Elements of human security are already entrenched in the East Asian reality. This book ponders what, then, should be done next in this world of global connectivity.
Yoichi Mine is Professor in the Graduate School of Global Studies at Doshisha University, Japan.
Oscar A. Gómez is Research Fellow at the Japan International Cooperation Agency Research Institute (JICA-RI), Japan.
Ako Muto is Senior Research Fellow at the Japan International Cooperation Agency Research Institute (JICA-RI), Japan.