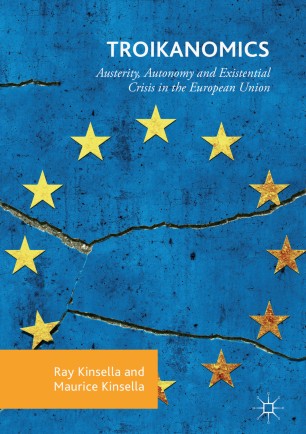 Austerity, Autonomy and Existential Crisis in the European Union

The ‘Troika’ is a word that is scorched into the narrative of the EU’s banking and economic crisis – a triumvirate constituted by the European Central Bank, the European Commission and the International Monetary Fund. The modus operandi of the Troika is defined by the authors of this book as ‘Troikanomics’.

Ostensibly, the role of the Troika was to develop, coordinate and oversee the provision of conditional funding to support national governments in restructuring their economies. In fact, their power and influence extended far more widely. They enforced an unprecedentedly severe austerity programme of fiscal and structural adjustment through oppressive political oversight. Their practical impact was to impose on debtor countries in the EU periphery the single greatest economic and social dislocation in Europe’s recent history, thus corroding their autonomous capacities and enfeebling their national sovereignty.

The Troika’s word was law in those countries where its writ ran – Greece, Ireland, Cyprus, and to a more limited extent, Spain. It was answerable only to a trio of unelected organisations, far removed from the consequences of its policies on the lives of citizens. Widespread socio-political reaction to Troikanomics gave shape to the anti-austerity movement across the EU, characterised by the centre as ‘Populism’.

This book provides a timely response to the revisionist argument that there is no longer a ‘crisis’ in Europe. In their innovative analysis, the authors argue that Troikanomics is a manifestation of a deeper existential crisis within the EU that encompasses the centralisation of power, Brexit, Europe’s ominous militarisation and the progressive abandonment of its foundational values.

Ray Kinsella began his career as an economist in the Central Bank of Ireland, before being appointed Professor of Financial Services at the University of Ulster, UK and subsequently to the Faculty of the Michael Smurfit School of Business in Dublin, Republic of Ireland.