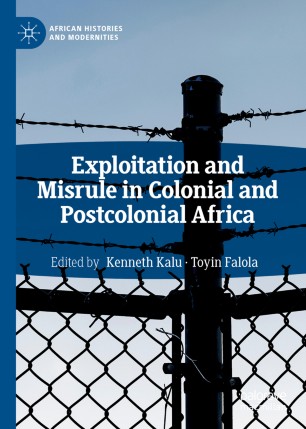 Exploitation and Misrule in Colonial and Postcolonial Africa

This book offers new perspectives on the history of exploitation in Africa by examining postcolonial misrule as a product of colonial exploitation. Political independence has not produced inclusive institutions, economic growth, or social stability for most Africans—it has merely transferred the benefits of exploitation from colonial Europe to a tiny African elite. Contributors investigate representations of colonial and postcolonial exploitation in literature and rhetoric, covering works from African writers such as Ngugi wa Thiong’o, Kwame Nkrumah, and Bessie Head. It then moves to case studies, drawing lines between colonial subjugation and present-day challenges through essays on Mobutu’s Zaire, Nigerian politics, the Italian colonial fascist system, and more. Together, these essays look towards how African states may transform their institutions and rupture lingering colonial legacies.