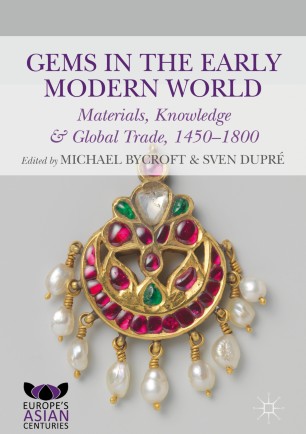 Gems in the Early Modern World

This edited collection is an interdisciplinary study of gems in the early modern world. It examines the relations between the art, science, and technology of gems, and it does so against the backdrop of an expanding global trade in gems. The eleven chapters are organised into three parts. The first part sets the scene by describing how gems moved around the early modern world, how they were set in motion, and how they were pulled together in the course of their travels. The second part is about value. It asks why people valued gems, how they determined the value of a given gem, and how the value of a gem was connected to its perceived place of origin. The third part deals with the skills involved in cutting, polishing, and mounting gems, and how these skills were transmitted and articulated by artisans. The common themes of all these chapters are materials, knowledge and global trade. The contributors to this volume focus on the material properties of gems such as their weight and hardness, on the knowledge involved in exchanging them and valuing them, and on the cultural consequences of the expanding trade in gems in Eurasia and the Americas.