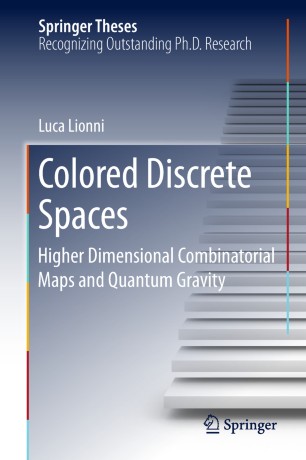 This book provides a number of combinatorial tools that allow a systematic study of very general discrete spaces involved in the context of discrete quantum gravity. In any dimension D, we can discretize Euclidean gravity in the absence of matter over random discrete spaces obtained by gluing families of polytopes together in all possible ways. These spaces are then classified according to their curvature. In D=2, it results in a theory of random discrete spheres, which converge in the continuum limit towards the Brownian sphere, a random fractal space interpreted as a quantum random space-time. In this limit, the continuous Liouville theory of D=2 quantum gravity is recovered.

Previous results in higher dimension regarded triangulations, converging towards  a continuum random tree, or gluings of simple building blocks of small sizes, for which multi-trace matrix model results are recovered in any even dimension. In this book, the author develops a bijection with stacked two-dimensional discrete surfaces for the most general colored building blocks, and details how it can be used to classify colored discrete spaces according to their curvature.  The way in which this combinatorial problem arrises in discrete quantum gravity and  random tensor models is discussed in detail.