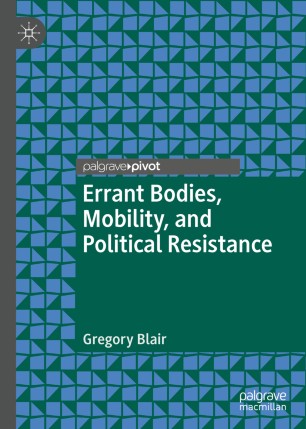 This book explores a type of wandering referred to as “errant bodies.” This form of wandering is intentional, without specific destination, and operates as a means of resistance against hegemonic forms of power and cultural prescriptions. Beginning with an examination of the character and particulars of being an errant body, the book investigates historical errant bodies including Ancient Greek Cynics, Punks, Baudelaire, Situationists, Earhart, Kerouac, Fuller, Baudrillard, Hamish Fulton, and Keri Smith. Being an errant body means stepping to the side of dominant culture, creating a potential means of political resistance in the technologically driven twenty-first century.
Gregory Blair is Associate Professor of Art at Northern State University, USA. He has exhibited his artwork and presented his research in locations that include Italy, Portugal, New York, New Orleans, Boston, Alaska, St. Louis, Cincinnati, Minneapolis, and Canada.