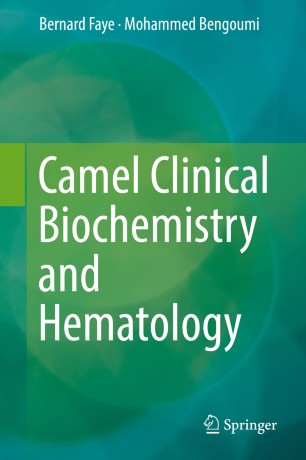 This work brings together a wealth of data regarding the reference values and factors of variation in biochemical parameters used by camel veterinarians and scientists to determine these animals’ nutritional and clinical status. It also explores several technical aspects involved in determining these parameters, sampling procedures, and essential elements in the interpretation of the results. Though many texts are available on small and large ruminants, much less is known about species confined to the marginal zones of tropical and Mediterranean countries, such as camels. This book addresses precisely this research gap, on the one hand by presenting an extensive review of the literature, and on the other by synthesizing the outcomes of the authors’ numerous previous works.

In veterinary medicine, blood tests to help diagnose diseases in cattle were first proposed nearly a century ago, but were mainly developed in the 1960s, initially at specialized research or veterinary services laboratories, and eventually, with the advent of new equipment and the miniaturization of the analyzers, finding their way into veterinarians’ cabinets. Beyond their diagnostic value, veterinary surgeons and zootechnicians also speculated on the potential use of blood tests to evaluate animals’ nutritional status. Thus, a whole range of analyses are now proposed to the stakeholders responsible for animal health. Such analyses could help to define a metabolic profile, which would offer a valuable decision-making tool for experts and researchers alike.

Bernard Faye, completed his doctorate in veterinary medicine at the Veterinary School of Lyon (France), then his MSci in animal nutrition and endocrinology (Clermont-Ferrand University, France). Following several years of both development (Niger) and research (Ethiopia) work in Africa, he obtained his PhD in animal epidemiology (Paris University), then the postdoctoral degree “habilitation to manage research teams” (HDR) at Montpellier University. He subsequently served as an epidemiologist at the Ecopathology Lab (National Agronomic Research Institute (INRA)), then joined CIRAD Montpellier as head of the animal production program, and later as a scientific project manager in animal production. He has gathered camel expertise in more than 45 countries, e.g. as an FAO consultant to Saudi Arabia at the Camel Research Centers in Al-Jouf and Kharj. One of the founders of ISOCARD, he is currently an independent international camel expert.
Mohammed Bengoumi, completed his PhD in veterinary medicine at the IAV Hassan II, Rabat (Morocco) on the topic “Clinical biochemistry in the camel and its adaptation to dehydration” in collaboration with the biochemistry laboratory at Toulouse-Rangueil Hospital (France). He served as an associate professor, then as a professor at the IAV Hassan II in the “Pharmacology, Toxicology and Biochemistry” department, where he led many projects on camel biochemistry. He subsequently worked at the FAO regional office in Cairo (Egypt) and notably developed the camel research program in Saudi Arabia. Currently, he works at the FAO sub-regional office for North Africa in Tunis (Tunisia), where he is responsible for animal production and health.