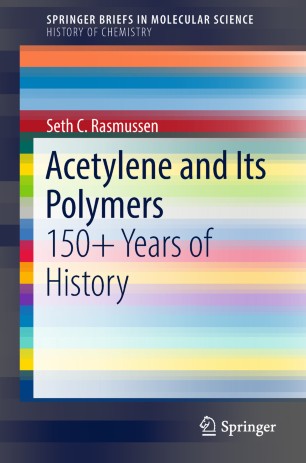 Acetylene and Its Polymers

This Brief presents for the first time a detailed historical overview of the development of acetylene polymers, beginning with the initial discovery of acetylene in 1836 and continuing up through the 2000 Nobel Prize in Chemistry. The polymerization of acetylene is most commonly associated with polyacetylene, which was found to be conductive when treated with oxidizing agents such as Br2 or I2 in the mid‐to‐late 1970s. In fact, under the right conditions, oxidized polyacetylenes can exhibit conductivities into the metallic regime, thus providing the first example of an organic polymer exhibiting metallic conductivity. As a consequence, the 2000 Nobel Prize in Chemistry was awarded to Hideki Shirakawa, Alan MacDiarmid, and Alan Heeger for this pioneering research, the award citation reading “for the discovery and development of electrically conductive polymers.” Because of this, most incorrectly view polyacetylene, as well as conducting polymers in general, to originate in the 1970s.

In this work, the author examines the polymerization of acetylene from early thermal polymerization studies to the ultimate production of the fully conjugated polyacetylene. Although true polyacetylene was not successfully produced until the 1950s by Giulio Natta, the polymerization of acetylene dates back to 1866 with the work of Marcellin Berthelot. These initial efforts were continued by a range of scientists to produce a polymeric material collectively given the name cuprene in 1900 by Paul Sabatier. Between the initial cuprene studies and the production of true polyacetylene, two related materials were also studied, usually referred to as polyenes and polyvinylenes. Although both of these materials could be thought of as forms of polyacetylene, neither was actually generated from the direct polymerization of acetylene. Readers will gain insight into the fact that polyacetylene and conducting organic polymers have a much longer history than commonly believed and involved the work of a significant number of Nobel Laureates.