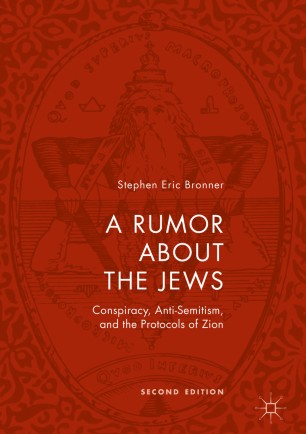 A Rumor about the Jews

Conspiracy, Anti-Semitism, and the Protocols of Zion

“A coherent treatment of a complex issue and its most significant secular document...Bronner may have written the best short book on anti-Semitism.”
—Kirkus Reviews
“In his scholarly yet highly readable account of the history of this infamous work, Stephen Eric Bronner does a great service not only to those who fight against anti-Semitism, but those who fight against contemporary political fanaticism…”
—Jewish Currents
“A fascinating, readable, and most worthwhile addition to the literature.”
—H-Net
“[A Rumor About the Jews] places The Protocols of the Elders of Zion within a broader framework, arguing effectively that acceptance of the notorious forgery had as much to do with reactions against liberalism and democracy as it did with anti-Semitism...this book makes an original and valuable contribution to the literature.”
—John A. Drobnicki, Library Journal
In its portrayal of Judaism as a worldwide conspiracy dedicated to the destruction of Christian civilization, the Protocols of the Learned Elders of Zion remains one of the most infamous documents ever written. Despite being proven a crude forgery, the pamphlet managed to pervade twentieth-century thinking, often being twisted to suit its handlers' purposes, and to justify the most extreme persecution of the Jews. In A Rumor About the Jews, Stephen Eric Bronner provides a history of this notorious fabrication—one which has renewed salience in a “post truth” society dominated by “fake news"—and explores its influence on right-wing movements throughout the twentieth century and the ongoing appeal of bigotry. This new edition of Bronner's 2000 classic (described by Kirkus as "the best short book on anti-Semitism") expands the arguments of the first edition, bringing the work up to date in a new political context.