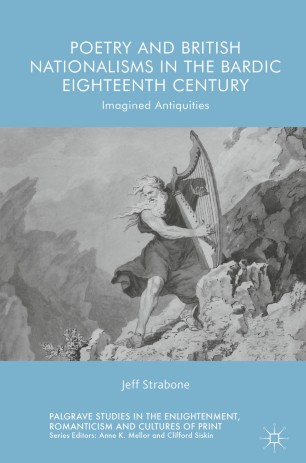 Poetry and British Nationalisms in the Bardic Eighteenth Century

Part of the Palgrave Studies in the Enlightenment, Romanticism and Cultures of Print book series (PERCP)

This book offers a radical new theory of the role of poetry in the rise of cultural nationalism. With equal attention to England, Scotland, and Wales, the book takes an Archipelagic approach to the study of poetics, print media, and medievalism in the rise of British Romanticism. It tells the story of how poets and antiquarian editors in the British nations rediscovered forgotten archaic poetic texts and repurposed them as the foundation of a new concept of the nation, now imagined as a primarily cultural formation. It also draws on legal and ecclesiastical history in drawing a sharp contrast between early modern and Romantic antiquarianisms. Equally a work of literary criticism and history, the book offers provocative new theorizations of nationalism and Romanticism and new readings of major British poets, including Allan Ramsay, Thomas Gray, and Samuel Taylor Coleridge.