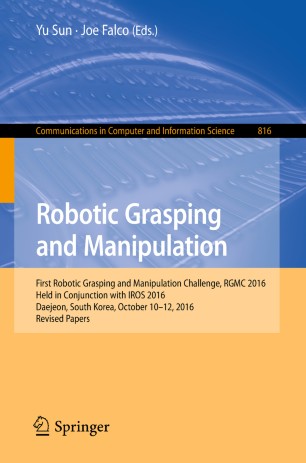 Part of the Communications in Computer and Information Science book series (CCIS, volume 816)

This book constitutes the refereed proceedings of the First Robotic Grasping and Manipulation Challenge, RGMC 2016, held at IROS 2016, Daejeon, South Korea, in October 2016.
The 13 revised full papers presented were carefully reviewed and are describing the rules, results, competitor systems and future directions of the inaugural competition. The competition was designed to allow researchers focused on the application of robot systems to compare the performance of hand designs as well as autonomous grasping and manipulation solutions across a common set of tasks. The competition was comprised of three tracks that included hand-in-hand grasping, fully autonomous grasping, and simulation.