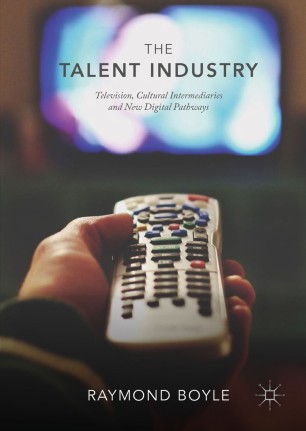 This book explores how the digital multiplatform delivery of television is affecting the role performed by cultural intermediaries responsible for talent identification and development.  Drawing on original research from key stakeholders across the television and social video sectors such as broadcasters, commissioning editors and talent agents, it investigates whether the process of digitization is offering new pathways to capture and nurture a diverse talent base within the UK television industry. It also provides an in-depth study of how the term ‘talent’ has historically been interpreted and understood within the UK television industry through the BBC and commercial PSB’s, such as ITV and Channel 4. The Talent Industry investigates how the traditional gatekeepers of talent in television are changing and examines the key role of talent agencies in managing and promoting contemporary on and off-screen talent in the digital age.

Raymond Boyle is Professor of Communications at the Centre for Cultural Policy Research at the University of Glasgow, Scotland. He has authored/co-authored a number of books including Sports Journalism (2006); Power Play (2009), The Television Entrepreneurs (2012) and The Rise and Fall of the UK Film Council (2015).

“In this vital and timely study of the role of agents and other intermediaries in the development of ‘talent’ in television, Boyle provides us with a behind-the-scenes look at the people who find the  people we see on our TV screens, and the people who work behind them. We get a detailed insight into how ‘talent’ is nurtured and who has access to work in the new multi-channel and multi-platform television ecology. An important and enjoyable read.” (Milly Williamson, Goldsmiths, University of London, UK)
Buy options