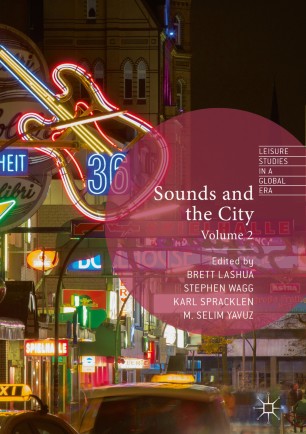 Sounds and the City

This book draws from a rich history of scholarship about the relations between music and cities, and the global flows between music and urban experience. The contributions in this collection comment on the global city as a nexus of moving people, changing places, and shifting social relations, asking what popular music can tell us about cities, and vice versa.
Since the publication of the first Sounds and the City volume, various movements, changes and shifts have amplified debates about globalization. From the waves of people migrating to Europe from the Syrian civil war and other conflict zones, to the 2016 “Brexit” vote to leave the European Union and American presidential election of Donald Trump. These, and other events, appear to have exposed an anti-globalist retreat toward isolationism and a backlash against multiculturalism that has been termed “post-globalization.” Amidst this, what of popular music? Does music offer renewed spaces and avenues for public protest, for collective action and resistance? What can the diverse​​ histories, hybridities, and legacies of popular music tell us about the ever-changing relations of people and cities?