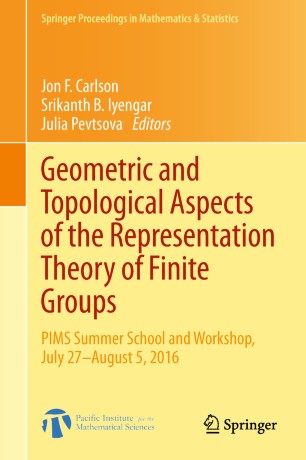 Geometric and Topological Aspects of the Representation Theory of Finite Groups

These proceedings comprise two workshops celebrating the accomplishments of David J. Benson on the occasion of his sixtieth birthday. The papers presented at the meetings were representative of the many mathematical subjects he has worked on, with an emphasis on group prepresentations and cohomology. The first workshop was titled "Groups, Representations, and Cohomology" and held from June 22 to June 27, 2015 at Sabhal Mòr Ostaig on the Isle of Skye, Scotland. The second was a combination of a summer school and workshop on the subject of "Geometric Methods in the Representation Theory of Finite Groups" and took place at the Pacific Institute for the Mathematical Sciences at the University of British Columbia in Vancouver from July 27 to August 5, 2016.
The contents of the volume include a composite of both summer school material and workshop-derived survey articles on geometric and topological aspects of the representation theory of finite groups. The mission of the annually sponsored Summer Schools is to train and draw new students, and help Ph.D students transition to independent research.