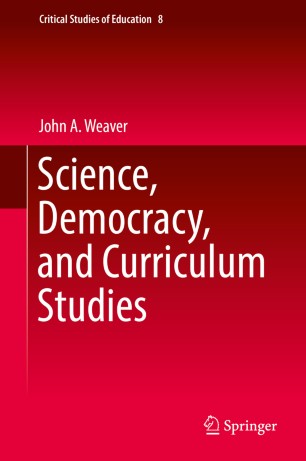 In this book John A. Weaver suggests curriculum studies scholars need to engage more in science matters. It offers a review of science studies writing from Ludwick Fleck and Thomas Kuhn to Philip Mirowski. The volume includes chapters on the rhetoric of science with a focus on the history of rhetoric and economics then on the rhetoric of models, statistics, and data, a critique of neoliberalism and its impact on science policy and the foundations of democracy, Harry Collin’s and Robert Evans’ theory of expertise followed by chapters on feminism with a focus on the work of Sharon Traweek, Karen Barad, and Vinciane Despret, postcolonial thought, with attention paid to the work of Daniela Bleichmar, Londa Schiebinger, Judith Carney, Sylvia Wynter, Paul Gilroy, and Sandra Harding, and a final chapter on Nietzsche’s philosophy of science. Each section is introduced by an interlude drawing on autobiographical connections between curriculum studies and science studies.

Science, Democracy, and Curriculum Studies is imaginative and virtuosic, narrated by John Weaver's pedagogical voice that does not hide behind pretenses. The argument for curriculum scholars and educationalists to attend to the questions of science is pitched as a loving plea. Taking a humanities-based approach, with influences ranging from Augustine to Karen Barad, science is neither dismissed as "fake" nor given a supernatural claim to autarky. Weaver's rich and varied content is arranged and composed with keen attention to form, surrounded by interludes and even aphorisms. It is a refreshing book where facile divisions are destroyed and reimagined.