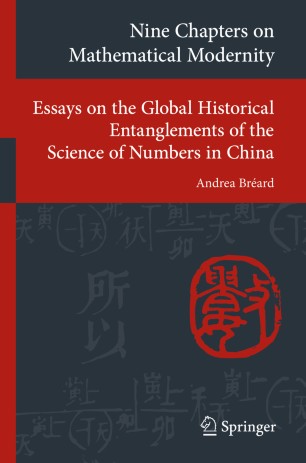 The book addresses for the first time the dynamics associated with the modernization of mathematics in China from the nineteenth to the mid-twentieth century from a transcultural global historical perspective. Rather than depict the transformations of mathematical knowledge in terms of a process of westernization, the book analyzes the complex interactions between different scientific communities and the ways in which the past, modernity, language, and mathematics were negotiated in a global context.

In each chapter, Andrea Bréard provides vivid portraits of a series of go-betweens (such as translators, educators, or state statisticians) based on a vast array of translated primary sources hitherto unavailable to a non-Chinese readership. They not only illustrate how Chinese scholars mediated between new mathematical objects and discursive modes, but also how they instrumentalized their autochthonous scientific roots in specific political and intellectual contexts. While sometimes technical in style, the book addresses all readers who are interested in the global and cultural history of science and the complexities involved in the making of universal mathematics.

“While the pursuit of modernity is in the title, entanglement is of as much interest. Using the famous ‘Nine Chapters’ as a framework, Bréard considers a wide range of that entanglement from divination to data management. Bréard’s analysis and thought-provoking insights show once again how much we can learn when two cultures intersect. A fascinating read!” (John Day, Boston University).