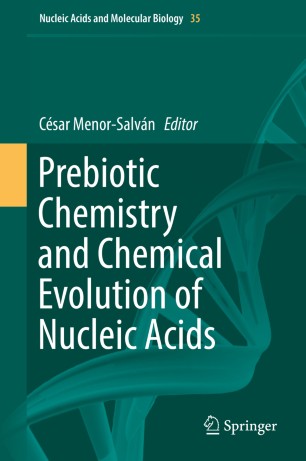 The origin of life is one of the biggest unsolved scientific questions. This book deals with the formation and first steps of the chemical evolution of nucleic acids, including the chemical roots behind the origin of their components from the simplest sources in a geochemical context. Chemical evolution encompasses the chemical processes and interactions conducive to self-assembly and supramolecular organization, leading to an increase of complexity and the emergence of life.
The book starts with a personal account of the pioneering work of Stanley Miller and Jeffrey Bada on the Chemistry of Origins of Life and how the development of organic chemistry beginning in the 19th century led to the emergence of the field of prebiotic chemistry, situated at the frontier between organic, geo- and biochemistry. It then continues reviewing in tutorial manner current central topics regarding the organization of nucleic acids: the origin of nucleobases and nucleosides, their phosphorylation and polymerization and ultimately, their self-assembly and supramolecular organization at the inception of life.