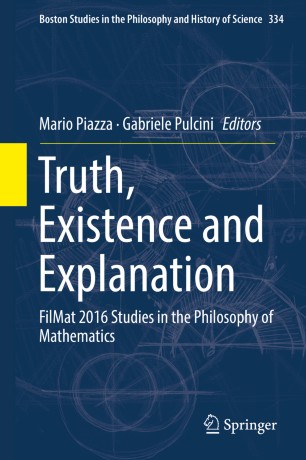 FilMat 2016 Studies in the Philosophy of Mathematics

Part of the Boston Studies in the Philosophy and History of Science book series (BSPS, volume 334)

This book contains more than 15 essays that explore issues in truth, existence, and explanation. It features cutting-edge research in the philosophy of mathematics and logic.
Renowned philosophers, mathematicians, and younger scholars provide an insightful contribution to the lively debate in this interdisciplinary field of inquiry. The essays look at realism vs. anti-realism as well as inflationary vs. deflationary theories of truth. The contributors also consider mathematical fictionalism, structuralism, the nature and role of axioms, constructive existence, and generality. In addition, coverage also looks at the explanatory role of mathematics and the philosophical relevance of mathematical explanation.
The book will appeal to a broad mathematical and philosophical audience. It contains work from FilMat, the Italian Network for the Philosophy of Mathematics. These papers collected here were also presented at their second interna
tional conference, held at the University of Chieti-Pescara, May 2016.