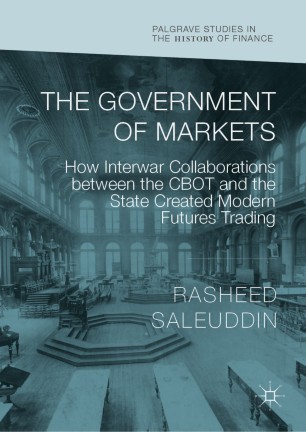 The Government of Markets

Absent evidence to the contrary, it is usually assumed that US financial markets developed in spite of government attempts to regulate, and therefore laissez faire is the best approach for developing critically important and enduring market institutions. This book makes heavy use of extensive archival sources that are no longer publicly available to describe in detail the discussions inside the CBOT and the often private and confidential negotiations between industry leaders and government officials. This work suggests that, contrary to the accepted story, what we now know of as modern futures markets were heavily co-constructed through a meaningful long-term collaboration between a progressive CBOT leadership and an extremely knowledgeable and pragmatic US federal government. The industry leaders had a difficult time evolving the modern institutions in the face of powerful reactionary internal forces. Yet in the end the CBOT, by co-opting and cooperating with federal officials, led the exchange and Chicago markets in general to a near century of global dominance. On the federal government side, knowledgeable technocrats and inspired politicians led an information and analysis explosion while interacting with industry, both formally and informally, to craft better markets for all.