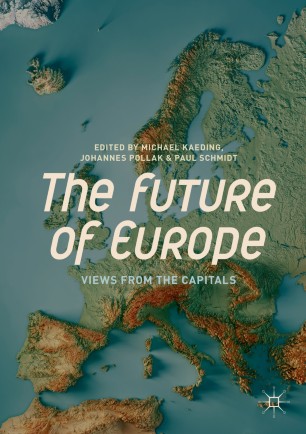 Views from the Capitals

With a Foreword by the President of the European Parliament, Antonio Tajani.
This book sheds light on the political dynamics within the EU member states and contributes to the discussions about Europe. Authors from all member states as well as Iceland, Norway, Switzerland and Turkey assess how their country could get more involved in the European debate, taking the reader on a journey through various political landscapes and different views. The chapters cover issues ranging from a perceived lack of ambition at the periphery to a careful balancing act between diverse standpoints at the geographical centre. Yet, discussions share common features such as the anxiety regarding national sovereignty, the migration and border discourse, security concerns as well as the obvious need to regain trust and create policies that work. The book contributes vigorously to the debate about Europe in all capitals and every corner of the continent, because this is where its future will be decided.
Michael Kaeding is Chairman of the Board of the Trans European Policy Studies Association. He is Professor of European Integration and European Union Politics at the University of Duisburg-Essen, Germany, and holds an ad personam Jean Monnet Chair.
Johannes Pollak is Director of and Professor of Political Science at the Webster Vienna Private University, Austria. He is also Senior Research Fellow at the Institute for Advanced Studies, Vienna, and Lecturer at the Universities of Salzburg and Vienna.
Paul Schmidt is Secretary General of the Austrian Society for European Politics in Vienna. Previously, he worked at the Oesterreichische Nationalbank, both in Vienna and at their Representative Office in Brussels at the Permanent Representation of Austria to the European Union.