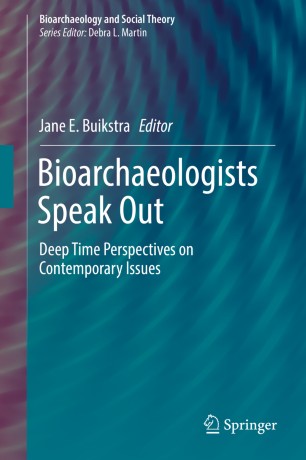 Part of the Bioarchaeology and Social Theory book series (BST)

Bioarchaeologists who study human remains in ancient, historic and contemporary settings are securely anchored within anthropology as anthropologists, yet they have not taken on the pundits the way other subdisciplines within anthropology have. Popular science authors frequently and selectively use bioarchaeological data on demography, disease, violence, migration and diet to buttress their poorly formed arguments about general trends in human behavior and health, beginning with our earliest ancestors. While bioarchaeologists are experts on these subjects, bioarchaeology and bioarchaeological approaches have largely remained invisible to the public eye.
Current issues such as climate change, droughts, warfare, violence, famine, and the effects of disease are media mainstays and are subjects familiar to bioarchaeologists, many of whom have empirical data and informed viewpoints, both for topical exploration and also for predictions based on human behavior in deep time.
The contributions in this volume will explore the how and where the data has been misused, present new ways of using evidence in the service of making new discoveries, and demonstrate ways that our long term interdisciplinarity lends itself to transdisciplinary wisdom.  We also consider possible reasons for bioarchaeological invisibility and offer advice concerning the absolute necessity of bioarchaeologists speaking out through social media.

Jane E. Buikstra is Regents’ Professor of Bioarchaeology and Founding Director, Center for Bioarchaeological Research in the School of Human Evolution and Social Change at Arizona State University.  Professor Buikstra was elected to the National Academy of Sciences (1987), and she is past president of the American Association of Physical Anthropologists, the American Anthropological Association and the Paleopathology Association.  She is also president of the Center for American Archeology. Dr. Buikstra has received the Pomerance Award for Scientific Contributions to Archaeology by the Archaeological Institute of America (2005), the T. Dale Stewart Award by the American Academy of Forensic Sciences (2008), the Charles R. Darwin Lifetime Achievement Award from the American Association of Physical Anthropologists (2008), the Eve Cockburn Award for Service from the Paleopathology Association (2011), an honorary Doctor of Science Degree from Durham University (UK) ( 2014), and The Lloyd Cotsen Prize for Lifetime Achievement in World Archaeology (2016).
Dr. Buikstra defined the discipline of bioarchaeology, an international field that enriches archaeological knowledge of past peoples through scientific study of their remains and archaeological/historical contexts. Her research regions span the Americas and includes the Eastern Mediterranean. She has published more than 20 books and 200 articles/chapters; she has mentored more than 50 doctoral students. Professor Buikstra was the inaugural editor-in-chief of the International Journal of Paleopathology. Among her current research projects, she is investigating the evolutionary history of ancient tuberculosis in the Americas based on archaeologically-recovered pathogen DNA.