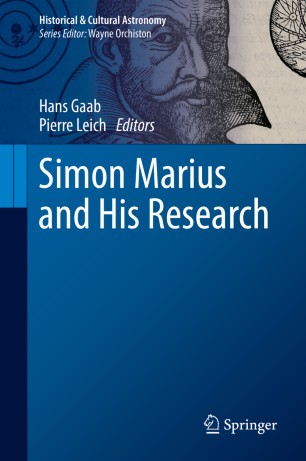 Simon Marius and His Research

The margravial court astronomer Simon Marius, was involved in all of the new observations made with the recently invented telescope in the early part of the seventeenth century. He also discovered the Moons of Jupiter in January 1610, but lost the priority dispute with Galileo Galilei, because he missed to publish his findings in a timely manner.
The history of astronomy neglected Marius for a long time, finding only the apologists for the Copernican system worthy of attention. In contrast the papers presented on the occasion of the Simon Marius Anniversary Conference 2014, and collected in this volume, demonstrate that it is just this struggle to find the correct astronomical system that makes him particularly interesting. His research into comets, sunspots, the Moons of Jupiter and the phases of Venus led him to abandon the Ptolemaic system and adopt the Tychonic one. He could not take the final step to heliocentricity but his rejection was based on empirical arguments of his time.
This volume presents a translation of the main work of Marius and shows the current state of historical research on Marius.

Dr. Hans Gaab, born 1956 in Ansbach, is a teacher for mathematics and physics at the Labenwolf-Gymnasium in Nuremberg and lives with his wife in Fuerth. From 1986–1989 he worked as a math’s teacher for the Deutscher Entwicklungsdienst DED (German Development Service) in the capital of Tanzania, Dodoma. Since many years he has been studying local history of astronomy and published numerous articles. In 2006 he was awarded the Silver Medal “Bene Merenti de Astronomia Norimbergensi” from the Nuremberg Astronomical Society. In 2010 he gained his doctorate for a thesis about Abdias Trew (1597–1669). It was published as volume 42 of the Acta Historica Astronomiae. In 2015 he published an extensive work about Albrecht Duerer’s star charts. From 2015 to 2017 he was Vice President of the Simon Marius Society.

Pierre Leich, born 1960, is a freelancer in science communication and the history of astronomy. For 10 years he was chairman of the art fair ART Nuremberg, edited an art magazine for 6 years and for 4 years he was managing director of Theatresports World Championship to FIFA WM 2006. Since 2003 Leich has been project manager of the Long Night of Sciences in Nuremberg / Fuerth / Erlangen and for the Science Day of the Nuremberg Metropolitan Region. Leich is honorary second chairman of the Cauchy-Forum-Nuremberg, curator of the Society of Astronomy Nuremberg, member of the advisory board of the Nicolaus-Copernicus-Planetarium Nuremberg and member of the Science Forum of the Nuremberg Metropolitan Region. In the “International Year of Astronomy 2009” he was branch manager for Northern Bavaria. Sind 2014 he has been editor of the Marius-Portal and President of the Simon Marius Society.

“Marius’ major works are reproduced in full. It is rewarding, thorough, academic, comprehensive, and well-illustrated. It is just the sort of major work that will grace the shelves of an astronomy library for many decades to come.” (David W. Hughes, The Observatory, Vol. 39 (1273), December, 2019)
Buy options