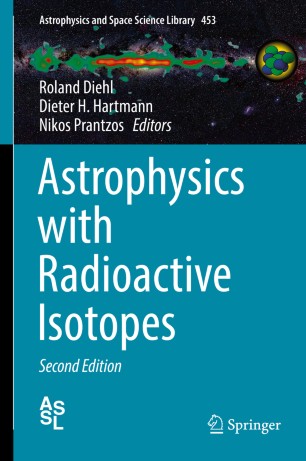 Dealing with astrophysics derived from the radiation emitted by radioactive atomic nuclei, this book describes the different methods used to measure cosmic radio-isotopes. It demonstrates how this astronomical window has contributed to the understanding of the sources and the chemical evolution of cosmic gas. Reference materials and explanations are included for students in advanced stages of their education.

Nuclear reactions in different sites across the universe lead to the production of stable and unstable nuclei. Their abundances can be measured through different methods, allowing to study the various nuclear processes taking place in cosmic environments. Nucleosynthesis is the cosmic formation of new nuclear species, starting from hydrogen and helium resulting from the big bang origins. Stars create and eject synthesized nuclei during their evolution and explosions. Incorporation of the new interstellar composition into next-generation stars characterises the compositional (chemical) evolution of cosmic gas in and between galaxies. Radioactive species have unique messages about how this occurs.

Since the first Edition of this book published in 2011 with the title Astronomy with Radioactivities, long-awaited new direct observations of supernova radioactivity have been made and are now addressed in two updated chapters dealing with supernovae. In this second Edition, the advances of recent years beyond one-dimensional treatments of stellar structure and stellar explosions towards 3-dimensional models have been included, and led to significant re-writings in Chapters 3-5. The sections on the Solar System origins have been re-written to account for new insights into the evolution of giant molecular clouds. The chapter on diffuse radioactivities now also includes material measurements of radioactivities in the current solar system, and their interpretations for recent nucleosynthesis activity in our Galaxy. Significant new results on gamma-rays from positron annihilations have been accounted for in that chapter, and led to new links with nucleosynthesis sources as well as interstellar transport processes. A new chapter now provides a description of interstellar processes often called 'chemical evolution', thus linking the creation of new nuclei to their abundance observations in gas and stars. The experimental / instrumental chapters on nuclear reaction measurements, on gamma-ray telescopes, and pre-solar grain laboratories have been updated. Moreover, new windows of astronomy that have been opened up in recent years have been included in the discussions of the multi-messenger approach that broadens the basis for astrophysical insights.