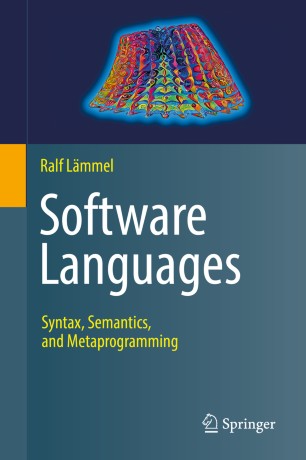 ​Ralf Lämmel is Software Engineer at Facebook since 2018 and Professor of Computer Science (currently on leave of absence) at the University of Koblenz-Landau in Germany since 2007. In the past, he had held positions at the University of l'Aquila, Microsoft, the Free University of Amsterdam, CWI (Dutch Center for Mathematics and Computer Science), and the University of Rostock, Germany. His research and teaching interests include software language engineering, software reverse engineering, software re-engineering, mining software repositories, functional programming, grammar-based and model-based techniques, and, more recently, megamodeling. He is one of the founding fathers of the international summer school series on Generative and Transformational Techniques on Software Engineering (GTTSE) and the international conference on Software Language Engineering (SLE).

Selected by Choice magazine as an Outstanding Academic Title for 2019

“The book’s 12 chapters cover a wealth of information by adopting a formal point of view that supplies the rigor needed for such an extensive treatment while offering plenty of self-learning opportunities through exercises and additional references. … This book is also useful as the first step in a more in-depth exploration of specific topics, such as metaprogramming, as it provides the references needed for a comprehensive literature review. … Summing Up: Highly recommended. Advanced undergraduates through faculty and professionals.” (L. Benedicenti, Choice, Vol. 56 (9), May, 2019)