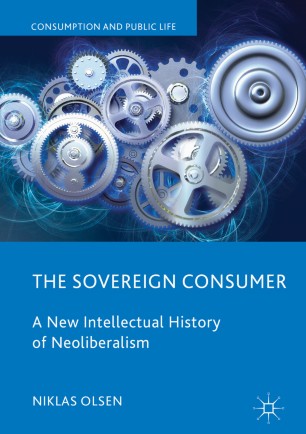 A New Intellectual History of Neoliberalism

Part of the Consumption and Public Life book series (CUCO)

Olsen takes the contemporary analysis of neoliberalism in an exciting and productive new direction by providing a genealogy of the script and a study of this neoliberal persona. It is a thrilling achievement.

This work provides us with a great example of the perplexing ways the original work of neoliberal intellectuals came to matter many years after their original conception.

Olsen reconnects intellectual origins and subsequent manifestations of neoliberal consumerism. He does a terrific job where others fail in neoliberalism studies: clarifying both the common thread at the ideational level and the wider influences and variety of real world experiences.

This book presents a new intellectual history of neoliberalism through the exploration of the sovereign consumer. Invented by neoliberal thinkers in the interwar period, this figure has been crucial to the construction and legimitization of neoliberal ideology and politics.

Analysis of the sovereign consumer across time and space demonstrates how neoliberals have linked the figure both to the idea of democracy as a method of choice, and also to a re-invention of the market as the democratic forum par excellence. Moreover, Olsen contemplates how the sovereign consumer has served to marketize politics and functioned as a major driver in a wide-ranging transformation in political thinking, subjecting traditional political values to the narrow pursuit of economic growth.

A politically timely project, The Sovereign Consumer will have a wide appeal in academic circles, especially for those interested in consumer and welfare studies, and in political, economic and cultural thought in the twentieth century.