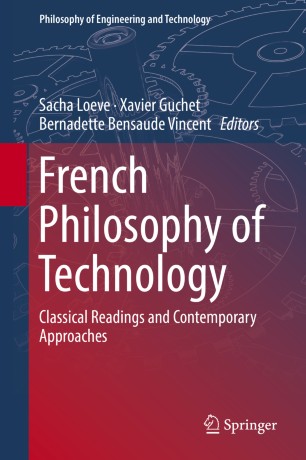 Part of the Philosophy of Engineering and Technology book series (POET, volume 29)

Offering an overall insight into the French tradition of philosophy of technology, this volume is meant to make French-speaking contributions more accessible to the international philosophical community. The first section, “Negotiating a Cultural Heritage,” presents a number of leading 20th century philosophical figures (from Bergson and Canguilhem to Simondon, Dagognet or Ellul) and intellectual movements (from Personalism to French Cybernetics and political ecology) that help shape philosophy of technology in the Francophone area, and feed into contemporary debates (ecology of technology, politics of technology, game studies). The second section, “Coining and Reconfiguring Technoscience,” traces the genealogy of this controversial concept and discusses its meanings and relevance. A third section, “Revisiting Anthropological Categories,” focuses on the relationships of technology with the natural and the human worlds from various perspectives that include anthropotechnology, Anthropocene, technological and vital norms and temporalities. The final section, “Innovating in Ethics, Design and Aesthetics,” brings together contributions that draw on various French traditions to afford fresh insights on ethics of technology, philosophy of design, techno-aesthetics and digital studies. The contributions in this volume are vivid and rich in original approaches that can spur exchanges and debates with other philosophical traditions.