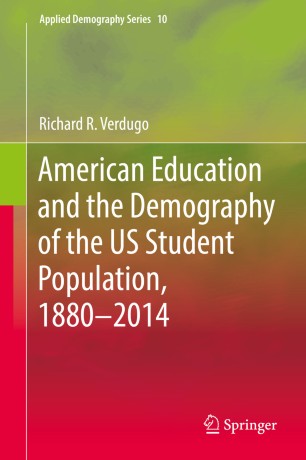 American Education and the Demography of the US Student Population, 1880 – 2014

This monograph examines changes in the American public school population from 1900 to 2010. It shows how different historical periods have affected the composition of the student body and have posed important challenges to those involved in shaping educational policy.
The author first develops an analytical framework that merges education and applied demography concepts. The education concepts include attendance, promotion, retention, high school graduation, and college enrollment. While, the applied demography concepts take into account size, distribution, and composition. He then applies this framework to the four most recent American historical periods: the Progressive Era, the Great Depression, the Post WWII Era, and the Post 1983 Era.
Readers will come to understand the changing socio-demographic profile of American schools due to such factors as immigration from Europe, child labor laws, internal migration, greater fertility and the rise of t
he Baby Boom generation, the changing status of women and minorities, the urban crises, rising social inequality, the 2008 recession, and globalization.
Featuring both historical and current data, this volume clearly shows how demographic change affects the teaching and learning environment, education policy, funding, and school segregation. Overall, it offers insightful analysis that may help shape the future of American education.

Richard R. Verdugo is a Sociologist, having earned a Doctorate in the field from the University of Southern California.  He has retired from the labor force, and currently resides in the Ukraine, but shuttles between the Ukraine and other European nations.  Richard’s research interests are eclectic as he has published regularly in four research areas: sociology, economics, education, and demography.  His most recent publications include two books (Education Reform in Europe; and Latin American Immigrants in Spain, with Andreu Domingo and Albert Sabater).  He has a forthcoming book on National Identity in Europe (with Andrew Milne), in which he has co-authored three chapters: one a general introduction to the topic, with Andew Milne; one on national identity in Germany, with Dana Martin; and another on national identity in Russia, with Oxana Karnaukhova.  His most recent journal articles include two papers in the International Journal of Education Reform, which he Guest Edited (Education Reform in China, with Aihua Hu; and a paper on Education Reform and Community).  His most recent research focuses on PISA and Social Structure; underutilized labor in Europe; the Demography of the US school population from 1900 to 2010; non-English use in the USA as a measure of Ethnicity from 1910 to 2010; a study of the American Sociology from 1900 to 2000; and research on the labor market experience of the Mexican American Worker from 1940 to 2010.