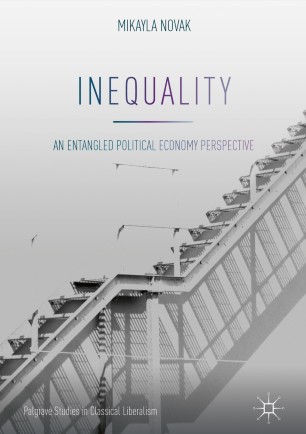 ‘This book is a thoroughly researched and well written exploration of one of the most divisive topics in modern democratic discourse. Novak brings careful and clear thinking to a topic too often clouded in emotion and guided by moral intuition. ‘
—Peter Boettke, Professor of Economics and Philosophy, George Mason University, USA

‘Inequality has bred a climate of hostile political discourse reminiscent of the cold war. In this lucid book, Novak explains how we can transcend that hostility by recognizing the deeply entangled character of politics and economics within modern societies.’
—Richard E. Wagner, Hobart R. Harris Professor of Economics, George Mason University, USA

In recent years the degree of income and wealth inequality within developed countries has been raised as a central issue in economic and social policy debates. Numerous figures across diverse ideological affinities have advocated policy measures to significantly alter income and wealth distributions, while the inequality debate has become infused with other subjects such as social justice and identity politics. This book presents an account of economic inequality from a contemporary classical liberal perspective. Inequality is seen as a by-product of entangled relationships within society, bringing to the fore key ideas from complexity, evolutionary and network sciences.

Novak illustrates that inequality is problematic insofar as it generates pro-rich redistribution and constrains progress by the less well off. Economic inequality has important links with issues such as fiscal and regulatory policies, discrimination and social exclusion, and institutional design.
This unique book is important reading for social science academics, policy makers and people interested in exploring the dimensions and solutions to inequality, a critical issue of our time.

Mikayla Novak is Postdoctoral Research Fellow at RMIT University, Melbourne, Australia. Novak is recognised as one of Australia’s leading economists in the classical liberal philosophical tradition. She has been a prolific contributor to Australian public policy debates, having written over 240 newspaper opinion articles on economic and social issues.